The beYOUtiful Life: Hair Notes from the 2018 BET Awards

In this edition of The beYOUtiful Life, let’s flashback to the 2018 BET Awards with a few hair notes and observations. 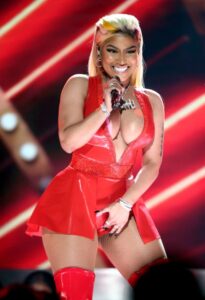 Every year, black women and men illuminate the BET Awards red carpet with an array of gorgeous beauty looks, and this year, vibrant hair colors were all the rage. From Blac Chyna’s silver waves to Nicki Minaj’s tie-dye strands, hairstyles showed off a burst of hues in different textures and lengths. Scroll through to see the coolest and most colorful hair at the 2018 BET Awards.

Then, there was the long ponytail that swayed and slayed.  We were still fawning over Tiffany Haddish’s wavy, waist-length ponytail at the MTV Movie and TV Awards, when those at the 2018 BET Awards, knocked this most basic hairstyle out of the park.

The comedian hosted the night’s event – but her wavy, waist-length ponytail was no joke.

Sorry, Oscars – but the BET Awards are one of our favorite carpets of the year. It’s not every show that you get to see Michael B. Jordan and BlocBoy JB under the same roof, you know? And you damn sure won’t see Anita Baker and Nicki Minaj brush shoulders anywhere else, either.

Some of our very favorites from the 2018 BET Awards were the natural hair and protective styles that are just perfect for summer days and sleepless nights in South Florida. Skim some of the photos in the article below. You’ll fall in love with Logan Browning’s faux locs and Amandla Stenberg’s rainbow braid.

The Best Natural & Protective Styles At The 2018 BET Awards

There’s a reason why you’ll see the BET Awards referred to as a family reunion of sorts: It’s the one awards show where the brown and Black faces that star in our favorite movies and music videos come together for a glorious night of celebrating us being us.

And then there’s Lakeith Stanfield, known for his roles in the film Get Out and the TV series Atlanta. There’s nothing we can say, except FAIL.

Folks can’t get enough of Lakeith Stanfield’s new look on the BET Awards red carpet. The “Get Out” and “Atlanta” actor appeared on the red carpet wearing a black wig pulled into two pigtails and barrettes to bring the entire look together.

What are your best and worst hair picks from the 2018 BET Awards? Drop a shout-out or shout-down on Twitter with the hashtag: #AskKarlinesSalon

00:00 Add to calendar New Year, New You: Make an Appointment

This 30-minute express facial treatment is great for all skin types. It includes a cleanse, exfoliation, extractions, and calming mask. Ask for the Duval Mini Maintenance special.

Get your hair groove on and a free gift too. Make a Friday appointment today. One free gift per client while supplies last.

The perfect combination of products to care for your hair at home and in-between salon visits. Each bundle includes shampoo, conditioner, styling or wrapping lotion, and shine serum. Plus, you’ll receive a free KS Satin Scarf/Bandana.

Save $10 on Blowouts every Tuesday! Price includes shampoo, conditioner, and trim. Regularly starting at $90.